My Review- Men In Black 3

In this third excursion into the ridiculous ongoing fight with aliens living among us on earth, Will Smith, Tommy Lee Jones, and Josh Brolin, as a younger K, Tommy Lee Jones’ character, continue their battle to save Earth from alien invasion, but this time, with a healthy dose of time travel mixed in. 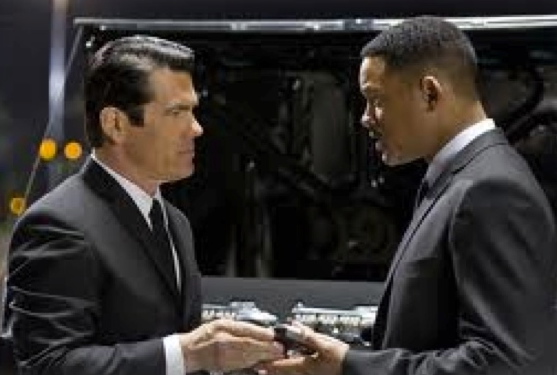 Will Clark & Josh Brolin in 1969 tracking down Aliens.

Josh Brolin gives a stellar performance as a much younger version of Tommy Lee Jones’ character, K back before he became a cynical, grouchy, set-in-his-ways MIB agent. It’s amazing how well he becomes young K down to the last detail of his quirky accent, his comedic timing, and body language. Will Smith seems to be almost timeless and never seems to age! The latest incarnation of the Men In Black movie franchise starts out with the escape of Boris the Animal from a lunar prison designed specifically to hold him. He has one arm missing and we learn that it was shot off by Agent K when he was arrested back in 1969, and Boris is hellbent on revenge. Back on Earth the MIB agents are gathered for the memorial service of Chief Zed who formerly had been played by Rip Torn in the first two movies. No explanation is offered for his demise and Agent K gives a very heartfelt, touching eulogy, “Z was my superior. In all the years I knew him, he never gave away anything personal about himself, nor did he invite me to his house. Thank you.” and he sits down. LOL

Agent K and Agent J shoot it out in a Chinese restaurant which is run by aliens where they serve other aliens, as in “on the menu”.

There are some very funny moments in MIB 3, if you’re a fan of this movie concept and franchise. The animation used to integrate many of the alien creatures is great, and I did find the storyline plausible. Tommy Lee Jones is in the beginning of the movie, but then disappears for 45 minutes as Josh Brolin takes over the role of Agent K after Agent J goes back to the past to save the future from an all out alien invasion that was underway when he jumps off of the Chrysler Building to activate his “time jump”. Emma Thompson has taken over as the head of the MIB organization with the unexplained demise of Agent Zed, and plays a critical role in the movie.

I enjoy movies like “Men In Black 3” because it allows us to forget about our own problems and reality for a couple of hours and instead just immerse ourselves in the lighthearted imagery and dialogue that the “Men In Black” movies are known for. We can only hope that IF there are aliens living among us, there is an agency like MIB watching over us, even if we are neuralized so we don’t remember it after we witness them protecting us. It could happen, right?

MEN IN BLACK 3 is out on DVD/Blue Ray now and is packed with special features!

Opinionated Computer Technician, former Pastry Chef, Realtor, and jack of many trades- master of a few. Avid movie goer who attends advance screenings to give his opinion on upcoming movies. Happily divorced father of two daughters and grandson. A small town guy living in the big city of New York.
View all posts by Carlin →
This entry was posted in Movie Review. Bookmark the permalink.