My New Rating System! This is a MUST SEE MOVIE! See it in IMAX!

In the mid 1700’s, the Collins Family moved from England to the New World settling in Maine and began building a successful seaside fishing community named after their family, Collinsport. The youngest son, Barnabas grew to be a very handsome young man who became the love interest of a young woman who practiced the dark arts. Being a scholar himself, he knew the dangers of going against a witch, but his heart belonged to his beloved Josette, not to the evil Angelique. 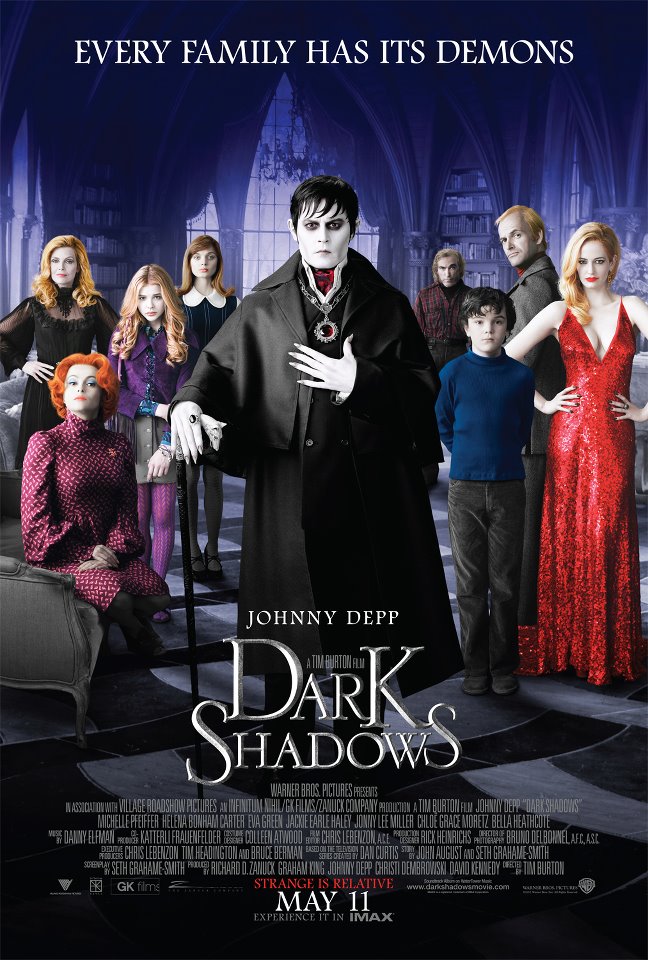 Johnny Depp does a spectacular portrayal of Barnabas Collins who is turned into a vampire as his curse to live forever without love after Angelique compels Josette to plunge to her death from a cliff. Dark Shadows was one of the first modern interpretations of the classic vampire genre when they added the Barnabas Collins character to the ABC soap opera back in the 1960’s in an attempt to boost their sagging ratings. What was intended to be a short 13 week temporary appearance turned out to become the main character of the show which continued until 1971.

Most of the movie takes place in 1972 after the casket which was buried in the 1700’s with Barnabas Collins imprisoned inside, was dug up accidentally by a construction crew. After having his first snack in 200 years, the vampire Barnabas begins to encounter the many changes that have occurred while he was buried, including electricity, motorized transportation, television and women doctors!

Directed by Tim Burton in his latest venture working with Johnny Depp, the movie has Tim Burton’s trademark dark style but mixed with Depp’s perfect comedic timing and sense of humor. There is brilliant use of many iconic images and music from the 70’s including music from The Carpenters, Alice Cooper, and some great old classic 70’s cars. Burton has done a brilliant job of taking a storyline that stretched over many years and compacting the best tidbits of the story into this 2 hour homage to the original series with the perfect blend of comedy, drama, love, heartbreak, and tragedy which includes a witch, vampires, werewolf, ghosts, and family secrets.

Opinionated Computer Technician, former Pastry Chef, Realtor, and jack of many trades- master of a few. Avid movie goer who attends advance screenings to give his opinion on upcoming movies. Happily divorced father of two daughters and grandson. A small town guy living in the big city of New York.
View all posts by Carlin →
This entry was posted in Movie Review, Uncategorized. Bookmark the permalink.